When you hear the word “birthday”, what do you think of?

I think many people imagine “birthday cake”, and Japanese people are no exception.

But on first birthday, we celebrate our baby with “rice cake”.

The rice cake that used on 1 year birthday is called “Issho mochi”. It’s a round shaped rice cake and about 1.8 kilograms. 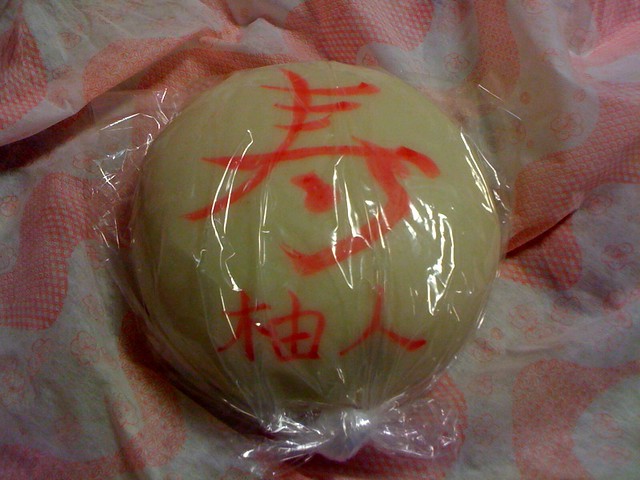 Parents make child carry Issho mochi, and watch over what kind of reaction does their child have. Some children cry, and some children go down, but any reaction would be considered good luck.

(Issho mochi is packaged in a traditional wrapping cloth.)

The detail of the ceremony depends on areas. For example, parents in Kyushu(southwestern-most of Japan’s main islands) make their child step on Issho mochi.

And parents in east Japan area try to trip their child or prevent the child from walking.

You might think it’s weird, but Japanese people perform this strange ritual to wish for their child’s happy future.

The meaning of the word “Erabitori” is choose and take an item.

We also carry out Erabitori on first birthday. It is said that this ritual tells child’s future.

First, parents put several items in front of their child, and then watch over which items does the child choose and pick.

The selected item is said to indicate the child’s talent in the future.

There’re no strict regulations of Erabitori, so you can free to add or remove the items from the list of Erabitori. Some parents add Smartphone, Soccer ball, Musical instrument, Shoes.

We put Money, Shoes, Pen, Calculator, Scissors, Musical instrument. And he touched the Calculator first, and then picked up the Money.

Though it’s hard to decide which items did he choose and take, either way he chose Money-related item.

Japanese people don’t really believe in this fortune telling. But the birthday party will be really exciting, if we take place this ritual.

If you are interested, why don’t you try Erabitori on your child’s birthday?

I believe Japan is one of the safest country. But on the other hand, earthquakes happen frequently. The chance of ser...

Selecting souvenir for family can be fun, but it's sometimes hard. Especially, babies can't tell what they want. Then...

Travel Packing Checklist for a Baby or Toddler

Preparation is very important to success for travel with a baby and toddler. Please use the below checklist and make sur...

Have you ever been to 100 yen shop in Japan? If you haven't, I really recommend you go there and buy some children's ...

Useful Japanese Phrases for Eating Out with a Baby

Eating out with baby is lots of work sometimes. But when you come to Japan, you should enjoy Japanese restaurants. So...

Baby diapers take up too much space in a suitcase, and we want to travel as light as possible. Then, it's better to g...
IWATE with a Baby：How to Enjoy Family Travel
What to Eat in Nagoya with a Toddler